MACHINE TRANSLATION DISCLAIMER
Please be aware that this is a machine translation to provide a basic understanding of our web content: since translations are done by machine, they are literal, so certain words may not translate accurately. Viewers who rely on information through machine translation on our website do so at their own risk. HERALDS VERITAS shall not be liable for any inaccuracies or errors in the translation and shall not accept liability for any problem arising from or in connection with use of this translation. If there is any concern regarding the accuracy of the information presented within the translated versions of this site, please refer back to the Portuguese language website, which is the only official version.
Skip to Content
Home / EN-Documents / The Dicastery for the Laity responds to the Heralds

On November 12, 2019, Cardinal Farrell, Prefect of the Dicastery for the Laity, Family and Life (on which the heralds of the Gospel institution depend, as a Private Association of Laity), responded to the letter sent to the Dicastery by the President General of the Heralds, mr. Felipe Lecaros Concha, published here previously.

In the five-page letter, which motivated two respectful "pleas", the Card. Farrell responds as follows (our translation):

this Dicastery for the Laity, the Family and Life received his letter of 22 October 2019, for which he asked the Dicastery to take over the procedures relating to the private international association of faithful Heralds of the Gospel.

I took care to refer your letter to the Congregation to institutes of consecrated life and societies of apostolic life. In fact, the Dicastery, at the time, gave assent to the congregation mentioned above, both for the beginning of the apostolic visit and for the adoption of the provisions resulting from the same visit, with respect to the association.

I take this opportunity to extend cordial greetings in the Lord.

See below the fac-simile of the original letter (written in Italian): 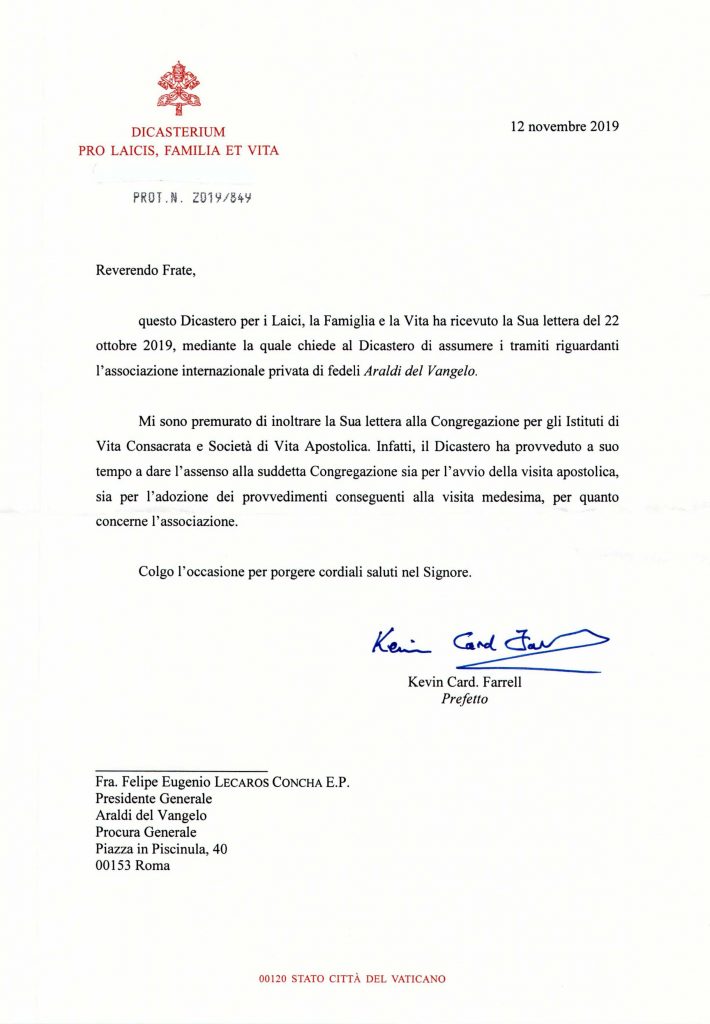 Decree of Commission of the Heralds of the Gospel

Homily: True history is governed by the Righteous